The da Vinci robot has long conquered its market, costing more than $2 million just to purchase. Adding the yearly maintenance, training of staﬀ and disposable parts, the cost increases. However, robotic surgery is getting more common and has a positive aﬀect on both surgeons and patients.

– It’s a huge difference for us performing the surgeries, said Dr. Ulrika Johannesson, chief physician at the Department of Obstetrics and Gynecology at Danderyd hospital, Stockholm, Sweden. The disadvantage…is the cost. It’s a very expensive system.

The American company Intuitive Surgical Corp. has ran a monopoly in its market since it launched the da Vinci robot in year 2000, but new producers are soon to enter, Dr. Johannesson said.

– And then, like at all markets, the prices will probably decrease.

The robot is controlled by the surgeon, sitting in front of a console and screen. Sitting down by a console is more friendly to neck and shoulders than standing and bending over a patient for hours.

– You need to have in mind the surgeon’s point of view, that one needs to operate for many years to come, and that it’s better to last than to wear oneself out.

The robot-assisted surgery system can be used by a surgeon in one country performing surgery at a patient in another country.

Dr. Johannesson works primarily with intuitive and robot-assisted surgery. She is also head of the team working with robotics at her department.

– We control the robot. Without [surgeons], there will not be a surgery, Dr. Johannesson said. Some patients believe we just press a button, and the robot performs the surgery. That’s not how it works.

According to an article in the Swedish publication Dagens Medicin from 2016, their count showed 27 robots in Sweden compared to eight in 2012.To make the most out of the remote
robot, it should be used at least 200 times per year.

Instruments at the end of the robot’s four arms, the parts that enter the patient, can turn 360 degrees. The camera accompanying them gives a three-dimensional picture of the abdominal cavity. The biggest advantage with the da Vinci robot is that it got wrist movements, making the stitching easier.

– That’s the hard part of invasive surgery,  said Dr. Johannesson.  All forms of trembling etc. is removed by the use of the robot.

“More people should challenge traditional truths in purchasing and logistics”

Janine Cover moved from Mexico to Sweden to study International Economics at Jönköping University. She has now been in Sweden for over 12 years, and currently works in logistics planning and purchasing at Boliden – the Nordic region’s leading company in sustainable metal production....

Cooperation and receptiveness keys to success

Order your face shields! We are now producing face shields, which we have developed together with a product designer and Capio Saint Göran’s Hospital.
... 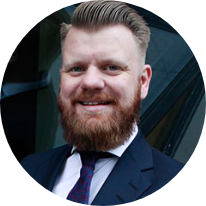 This website uses cookies
We use cookies to personalise content and ads, to provide social media features and to analyse our traffic. We also share information about your use of our site with our social media, advertising and analytics partners who may combine it with other information that you’ve provided to them or that they’ve collected from your use of their services.
Ok
x